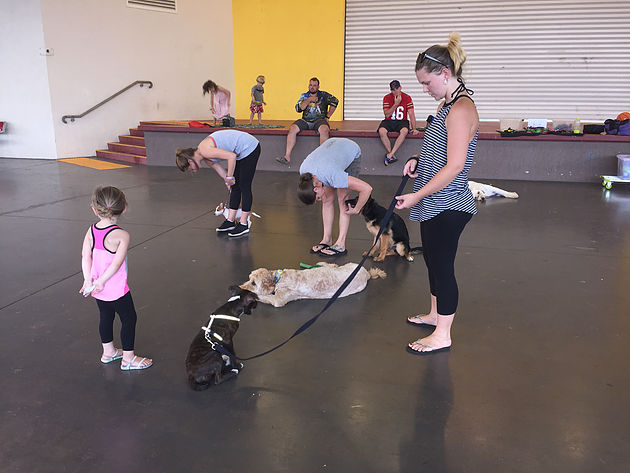 As a professional dog trainer offering programs for dogs of all ages I get lots of calls, emails, and messages about owners wanting to start puppy school because they want to socialise their puppy with other puppies so they will get a long with dogs when they are older. Socialising with puppies is important but it’s not the only thing and it certainly doesn’t mean your puppy will be social with dogs when they are older.  There are lots of things that come in to play.  For example, you go to your local puppy pre school where pups are allowed to run around with the other puppies, great, but your puppy is jumped on constantly and now has had a negative experience with other puppies and has started to growl out of fear.  This isn’t a positive experience for your puppy and most certainly can imprint negative experiences with your puppy as they mature.

To me socialising a puppy with their WORLD is far more important than socialising with other puppies. When I got Ralph as a puppy I took him anywhere and everywhere I could, he had positive experiences at the local parks, meeting other dogs, listening to kids play, school grounds walking up and down stairs, playing with puppies at puppy school in a controlled manner.  No puppy was allowed to jump on another puppy, nor were the adult dogs that were involved as well.

Socialisation is learning to act in a way that is acceptable when around different distractions and having positive experiences in preparation for the human world.  Puppies have a critical socialisation period which is open from birth and closes around 16 weeks, sometimes earlier at 12 weeks.

Most owners don’t get their puppies until they are 8 weeks old, and are told by their vets not to take their puppies until the full course of vaccinations is completed and sometimes saying 10 days after the final vaccination, which can mean your puppy may be anywhere between 16-20 weeks of age but the time you start taking them outside your yard and sometimes even your house.  Parvo is a horrible illness you don’t want your puppy to get, but sometimes I think you need to decide which is more important, the risk of catching Parvo compared to having a puppy that is not well socialised and may develop serious behaviour issues due to lack of positive experiences during the critical socialisation period.

Socialise around the following:

As the owner of a new puppy it is up to you to weigh up your options when it comes to socialisation with your new puppy.  Here are some ways you can lower the risk.

* Carry your puppy when going for a walk

* Take your puppy out in the car as much as possible

Putting in the time to allow your puppy to have plenty of positive experiences during this critical socialisation period and for their first year of life will pay off.  You will be helping your dog to become a well adjusted, sound, happy family member.  Remember socialising your puppy is not just about them interacting with other puppies, it is about them having positive encounters with the world they will be experiencing as an adult dog.

Mind Your Paws offers a variety of puppy training options.  Please head to our In Home Training page to find out more or contact Kristy on 0400 298 505 or email mindyourpaws@gmail.com